There was an immediate connection between SCE and GoodMills during the opening of the new flour factory in Piraeus, Greece. That meeting led to a big contract with the flour producer in 2013: the building of a new silo block in Kamionka with a total capacity of no less than 1.404m³. The delivery of all the components and the construction in Poland went fully according to the expected planning and quality norms.

Apart from the steel and roof construction, the stair tower and the cell deck, we were really successful at GoodMills with the hoppers and the smooth walled silos. The hoppers were completed with large, round corners, which ensured an overall identical angle of inclination and thus optimal drainage. That innovation combines the advantages of a round silo, being good drainage and light hoppers, with those of a rectangular one, namely better use of surface and avoiding hollow spaces.

The silo block is made up of eight silos for flour and ten for bran. The ground surface totals 213m² and the maximum height is 25 meters.

The smooth walled silos for flour are equipped with rounded vertical corners, which also ensures optimal drainage. In the bran silos, our team put in so-called 'noses' that will decrease pressure. This also prevents bridge forming. 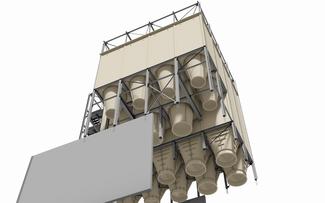 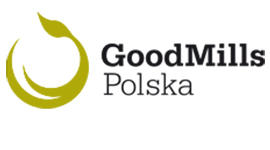 All points of the contract were fulfilled perfectly. We can look back on this cooperation with satisfaction. SCE is a company that we recommend 100%.